On 30 May 1944, the city was heavily bombed. The cathedral again (in 1940 it already suffered fire damage) fell prey to the flames and architectural damage was considerable. The inhabitants tried throughout the night to extinguish the fire. The cathedral could be saved but the Saint-Maclou (church) was in ashes. After the landing of the Allies, the German troops were still in the city. The bridges over the Seine were blown up and they could not leave.

On 30 August the Germans were the Canadians finally expelled from the city, for their retreat, they crossed the harbor installations still on fire. The toll was high after the war, more than 3,000 people were killed and 10,000 houses were in ashes. 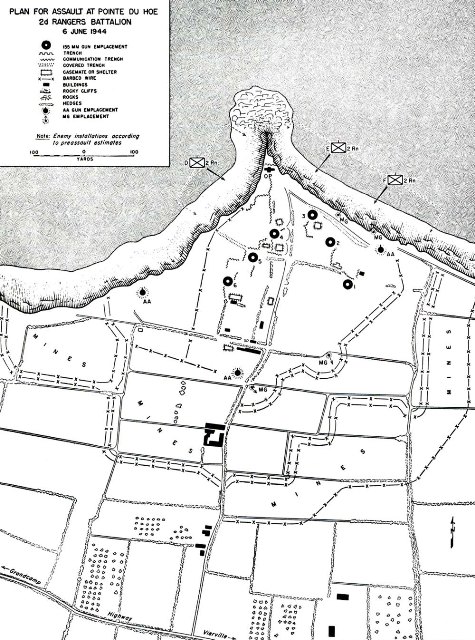 At Pointe du Hoc (often spelled as its Parisian French name “Pointe du Hoe” in official Army documents), the Germans had built, as part of the Atlantic Wall, six casemates to house a battery of captured French 155mm guns. With Pointe Du Hoc situated between Utah Beach to the west and Omaha Beach to the east, these guns threatened Allied landings on both beaches, risking heavy casualties in the landing forces.

Although there were several bombardments from the air and by naval guns, intelligence reports assumed that the fortifications were too strong, and would also require attack by ground forces. The U.S. 2nd Ranger Battalion was therefore given the task of destroying the strongpoint early on D-Day.