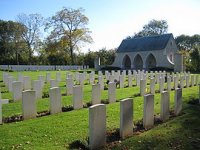 On 6 June 1944 in Normandy, the 3rd British Infantry Division under General Rennie slammed ashore around 7:30 am. The vehicles of the 79th Armoured Division, the engineers and the tanks of the 13/18th Hussars landed on Sword Beach, Queen sector. The special tanks tanks neutralized the fortifications of the beach.

Many of those buried in Hermanville War Cemetery died on 6 June or during the first days of the drive towards Caen.
The cemetery contains 1,003 Second World War burials, 103 of them unidentified.

But when the assault waves arrived on the beaches, some German positions were still offering resistance. At La Brèche d’Hermanville, the 2nd East Yorkshire and the 1st South Lancashire suffered losses facing the German machine-guns. The position – Cod – was a strong bastion, the Germans had reinforced the houses along the coast with concrete and trenches. The Commandos of the 4th Special Service Brigade and the 1st Special Service Brigade were brought with the second wave and moved toward their objectives. The 8th Brigade progressed toward Hermanville-sur-Mer, the town was liberated by the 1st South Lancashire around 9:30 am.