The invasion of Italy started with the invasion of Sicily when an ideal platform was created to make the jump to the mainland of Italy (and Europe). It ended until the surrender of German forces in Italy in May 1945. No campaign in Western Europe cost more than the Italian campaign in terms of lives lost and wounds suffered by infantry forces. It is estimated that between September 1943 and April 1945 some 60,000 Allied and 50,000 German soldiers died in Italy. 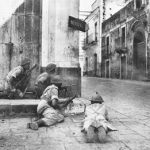 16 km north of Catania lies the town of Acireale. It took the 50th Division 2 days to conquer the town and the roadblocks the Germans and Italians set up.

In 2006 this corner was still occopied with a butcher but nowdays it is empty.

END_OF_DOCUMENT_TOKEN_TO_BE_REPLACED

After the fall of Catania’s 13th Corps continued its march north through the narrow strip between Mount Etna and the sea. The journey through this densely populated part of Sicily was costly and slow.

Near Persano stood a tobacco factory which was like a revolving door: after first being attacked on the September 11 by the 157th Regiment, it changed hands twice the following day before coming under American control. On September 13 a strong German counterattack recaptured the tobacco factory, and they remained unshakable there for five more days and in so doing were able to block any American advance further inland.

Nowdays the fram houses different companies, but for a part it is still not rebuilt. It looks like ages stood still and some rebuilt buldings are collapsed again.

A well-described account of the fierce fighting surrounding the tobacco factory can be found here: A Journey to World War II Battlefields Part 7

On September 9, 1943, Paestum was the location of the landing beaches of the U.S. 36th Infantry Division during the Allied invasion of Italy. German forces resisted the landings from the outset, causing heavy fighting within and around the town. Combat persisted around the town for nine days before the Germans withdrew to the north.