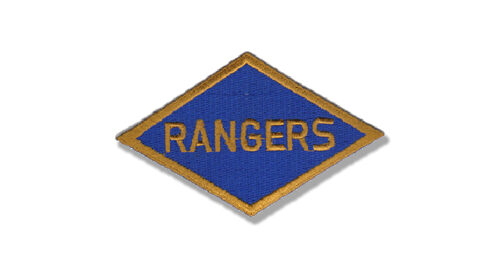 US Army Rangers WW2 patch / emblem. Worn by the Rangers during the second world war.

The U.S. Army did not have special operations units in 1941. That quickly changed when America declared war on the Axis and entered WWII. Major General Lucian Truscott of the U.S. Army submitted a proposal to General George Marshall that an American unit be set up “along the lines of the British Commandos“. Five Ranger Battalions would be organized in the European Theatre including the 1st, 2nd, 3rd, 4th and 5th; the 6th would be organized in the Pacific Theatre. The 7th, 8th, 9th, and 10th Ranger Battalions were “Ghost” formations, which were part of the deception plan known as “Operation Quicksilver.”

On 6 June 1944, during the assault landing on Dog White sector of Omaha Beach as part of the invasion of Normandy, then-Brigadier General Norman Cota (assistant division commander of the 29th Infantry Division) approached Major Max Schneider, CO of the 5th Ranger Battalion and asked “What outfit is this?”, Schneider answered “5th Rangers, Sir!” To this, Cota replied “Well, goddamnit, if you’re Rangers, lead the way!” From this, the Ranger motto—”Rangers lead the way!”—was born.

A Famous attack is the attack of the 2nd Ranger Battalion scaled the 90-foot (27 m) cliffs of Point du Hoc, a few miles to the west, to destroy a five-gun battery of captured French Canon de 155 mm GPF guns.